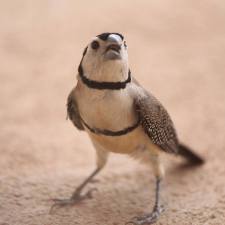 The original concept for The Chapel Project came from an idea to create music inspired by or directly referencing the native birdsong recordings of Kim V. Goldsmith. Birds have been central to Goldsmith’s work for the past decade, in particular her sensory installation works.

Over the following months, the project developed to include not only choral performance and music written for the project but bird-inspired mapped video projections, developed by a group of regionally-based digital media artists with whom Goldsmith has worked with over several years. Early on, the challenges were already evident but the concept inspired the interest of all the artists involved.

On the recommendation of Harmony Singers, Sydney-based classical pianist and composer, Sally Whitwell was approached, agreeing to work with Goldsmith and Harmony Singers to write choral music using the birdsong recordings as a starting point.

Whitwell came to Dubbo in July 2015 to conduct three composition workshops thanks to a Country Arts Support Program (auspiced by Orana Arts), introducing not only choir members to the project, but high school students and general community members from across the region. Additional support was provided by the Western Plains Cultural Centre (providing a venue) and Panscott Media (supplying editorial and advertising).

As well as coordinating the workshops, liaising with Whitwell and the choir, Goldsmith spent a large part of 2015 refining budgets and trying to raise funding for the project to cover Whitwell’s ongoing involvement, as well as funding professional development and project support for The Chapel Project video production team, project documentation, audio/visual hire, venue hire and artist fees.

As well as contributing many new ideas to the project, including a performance element, Whitwell wrote a score within days of her visit to Dubbo that has since been performed in its shortened version by Harmony Singers in St. Andrew’s Chapel.

None of the grant applications or sponsorship approaches made throughout 2015 were successful. By the end of the year, Goldsmith was asked to confirm The Chapel Project’s inclusion in Artlands Dubbo 2016. After much soul-searching and consultation with the creative team, Goldsmith agreed to continue on developing the project in time for the four-day national regional arts conference and festival in October 2016.

Some of the project’s challenges have been insurmountable due to the lack of funding. After much discussion and consideration, The Chapel Project ceased in late 2015 and has since undergone reinvention with a severely restricted budget. This has sadly meant the choir and Sally Whitwell are no longer involved. There’s been no funding available to be able to record the choral music so the installation could be more than a one-off choral performance. In order to be able to present a work at the Artlands festival, the focus has been on working with those elements that contribute most directly to the original vision.

Despite the lack of funding for the critical latter stages of developing a work for Artlands, The Chapel Project is considered a success because of the benefits gained by Harmony Singers and the community from working with Sally Whitwell during her visit to Dubbo. For Goldsmith, it has extended her scope as an artist and producer, opening up future opportunities for cross-disciplinary collaborations.

As of May 2016, the work titled Volucres has gone into production using a music soundtrack purchased for the project, mixed with birdsong recordings. The videos and choreographed elements of the work will be created over the next few months with the objective of having a test installation by the end of September/early October 2016.

The Chapel Project is dedicated to Jen Shearing, who passed away in January 2015.